Sonja is the sister of the rebel leader, Count Bulok. Flash Gordon and Bulok break Sonja out of the Mingo City prison. She instantly falls in love with the daring and handsome Flash. ("The Outlaws of Mongo")

When she's rejected by Flash, she visits Ming the Merciless and offers to help him regain his throne. ("The Tyrant of Mongo")

Sonja's background is never fully revealed. When first seen in the serial Flash Gordon Conquers the Universe, she is an attendant to Princess Aura in the kingdom of Arboria. However, it is soon made clear that Sonja is actually loyal to Ming the Merciless and has been leaking intelligence from Prince Barin's castle back to the Emperor by means of messenger birds.

It is Sonja who eventually leads Princess Aura into an ambush in the Red Forest, leading to Aura being forcibly taken back to her father and held in the women's quarters in his palace against her will. Pleased with Sonja's success in this enterprise, Ming has her assist Officer Torch and Lieutenant Thong when he sends them on a mission to the Land of the Dead to prevent Dr. Hans Zarkov from deploying the Nullitrion device. The venture proves to be unexpectedly complex when the Land of the Dead turns out to be inhabited by the Rock Men, and Sonja is the first of the arrivals they take prisoner. Although she puts a brave face on when captured, her usual tactics of using her feminine guile and trickery are useless against such a primitive tribe and she relies on Torch to get her away.

She and Torch then find themselves prisoners of Prince Barin. Sonja refuses to answer Flash Gordon's questions when he visits the cells, and instead tries to make a pact with him suggesting that together they can overthrow both Ming and Barin and rule the universe between them. This may have been mere trickery on Sonja's part, or perhaps she saw some potential in the idea. This may suggest her motivation was a lust for personal power rather than mere loyalty to Ming. As Flash readily dismissed the notion, Sonja did not pursue the idea any further. She did, however, facilitate an escape attempt by pretending to hang herself in her cell, and then ruthlessly killing the worried guard by stealing his ray gun and shooting him with it as he tried to save her.

When returned to Ming's palace, she is unruffled by the Emperor's fury that Captain Torch was not liberated, slyly putting a suggestion in Ming's head that Torch could be reclaimed by offering Dale Arden in exchange. Ming then tasks Sonja with poisoning Dale.

This was to be Sonja's last meaningful contribution to Ming's cause. As one of his trusted coterie, she was present in the tower of the palace alongside Ming when it was destroyed as a result of Flash Gordon aiming the Z-O rocket ship at it.

Sonja was cunning and cold-hearted. She was plucky too, but prone to moments of excitable terror, screaming in the face of earthquakes, iguanthions and crashing spaceships. She is considered beautiful, enough to be considered a rival by Dale Arden for Flash Gordon's heart. Dale and Sonja's rivalry saw them physically attack one another on two separate occasions, though neither scrap was allowed to play out to a natural conclusion.

Sonja is the Verden ice smuggler's wife in "Episode 102: Pride". She is played by Tiffany Lyndall-Knight. 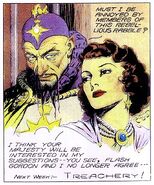