Johnson is a Canadian actor whose first major role was Whitney Fordman, a romantic rival for Clark Kent in the first season of the TV series Smallville. Johnson has also made guest appearances on Criminal Minds, The Ghost Whisperer and The Unit.

Johnson says that he appreciates the "regular guy" aspect of Flash's character:

Johnson says that his experiences on Smallville helped to prepare him for the science fiction fanbase that he'll attract: "I got a taste of that rabid fan base when I was on Smallville, and it's always good to know about your character when it's centered on a big mythology like this. But ultimately the fans will always know more than the actors, always."

A TV Guide article described the filming of a scene between Flash and Princess Aura, who orders Flash to take off his clothes. Johnson commented wryly on the scene:

Eric Johnson was born and raised in Edmonton, Alberta. When he was only 9, his desire to be the center of attention made him to enroll a theater school. He developed a passion for audience, and he secured performing roles in professional theater as well as landing film and television roles.

Johnson married Adria Budd in 2004; they met when Budd was a cast assistant on Smallville. The couple is expecting their first child in October 2007. Johnson and his wife, Adria Budd Johnson, are also involved in the social- and ecological-change organization named the Hollywood Hill. 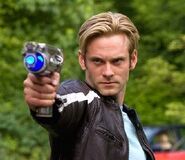 Add a photo to this gallery
Retrieved from "https://flashgordon.fandom.com/wiki/Eric_Johnson?oldid=13115"
Community content is available under CC-BY-SA unless otherwise noted.